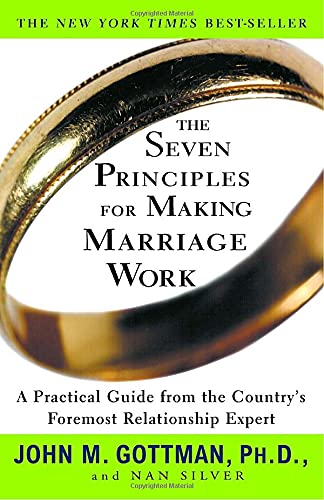 Self-help as a genre tends to have a short shelf life, but John Gottman’s The Seven Principles for Making Marriage Work, first published in 1999, continues to deal out what the title promises in its most recent edition. Gottman, a therapist and writer, founded the Gottman Institute with the aim of applying a research-based approach to marriages and has spent many years studying couples to try to identify factors that correlate with divorce. This book is one of several titles wherein he attempts to translate his research experience into practical advice for couples who want to repair or strengthen their relationships.

It’s encouraging to read advice from the perspective that love is a choice, not just a feeling. In describing his seven principles, Gottman outlines ways that couples can choose to increase intimacy, resolve conflict maturely, and build a meaningful life. In his first principle, for example, he argues that committed spouses create “Love Maps” for each other: they want to know and understand their partner’s interior and exterior world, rather than assuming that their shared life is all that’s worth knowing about each other. Later on, “Turn Toward Each Other Instead of Away” reminds readers to respond to stress and tension with care rather than escalation, while “Let Your Partner Influence You” is about the importance of compromise and growing together rather than apart. These are not radical solutions, but they are true ones, and through a series of exercises Gottman approaches romantic attachment as something that can be consciously built, maintained, and protected by committed spouses –  rather than treating love as a mere emotion, outside our control.

Here is one area the book shows its age: conspicuously absent are the subjects of emotional labor and the shared mental load of housekeeping, which have become more of a conscious concern since this book was first published. Still, the general principles for conflict resolution are sound and can be adapted to address other concerns. In categorizing these conflicts Gottman makes the interesting distinction between what he calls “solvable problems” and “perpetual” ones, as he observes that some points of contention may remain with you for the entirety of your relationship. He advises that couples recognize where their disagreements can be resolved, and where they cannot, while offering advice on how to keep those perpetual disagreements from ending your marriage. Indeed, to Gottman, irreconcilable differences are not, in fact, what leads to divorce.

In predicting divorce, Gottman enumerates several red flags, most notably what he refers to as the “four horsemen” of your personal marital apocalypse: criticism, contempt, defensiveness, and stonewalling.  Some readers may find his overconfident claims to be able to predict divorce as off-putting, particularly in the early chapters. For all the author’s self-assured contrasts between his work and other marriage advice, this book reads more as a collection of commonsense principles than radical or undiscovered wisdom. Still, sometimes we need to be reminded of what we already know – and, knowing it, need help putting it into practice.

Couples who are struggling or seeking to strengthen their Christian marriage should note that this is not a religious work (the author himself is Jewish); divorce is presented as a morally neutral option. Helpfully, though, it starts from the assumption that the reader wants to make their relationship last, and sets out a plan to achieve that goal. Insofar as it is helping couples be faithful, this work is compatible with a Catholic view of marriage.

While Gottman does not address that Catholic view directly, he does acknowledge that your religious beliefs will shape your view of marriage and gender roles. He emphasizes that while he is not endorsing any one religious view, he also doesn’t see his principles as contradicting the tenets of any major faith. He calls out men in particular who claim that their belief system requires them to be unyielding and controlling husbands, countering with his belief that “a marriage can’t work unless both partners honor and respect each other. That’s true whatever your belief system” (119). Gottman’s understanding of different religious attitudes toward gender roles and equality may lack nuance, but again, a system encouraging mutual honor and respect lines up well with Catholic teaching.

The main readership of this book will be already-married couples, but the engaged-and-preparing couple may also find it helpful. It’s not a guide to choosing a spouse, but rather a guide for those who, having chosen a spouse, want to – as the title indicates – “make marriage work.” This work of marriage is a joint endeavor; the advice and exercises provided here assume that both spouses are supportive and willing to grow and change. If you are the spouse being criticized, held in contempt, or stonewalled by a partner who is unwilling to admit there is anything wrong in your relationship, this book unfortunately will not provide you with the magic phrase or behavior that will spark change in them. This book reflects good marital therapy practices but is not a replacement for real therapy. This book does provide a remarkably succinct description of the practices that help relationships to thrive  – and those that don’t. It has an abundance of exercises that provides spouses with concrete actions they can take to improve their relationships and life together. If you can accept some of its limitations, you’ll find real, practical, and honest help for your marriage.

About the Reviewer:
Sara Sefranek is an English teacher turned homeschooling mother of four. She lives in Colorado with her family.